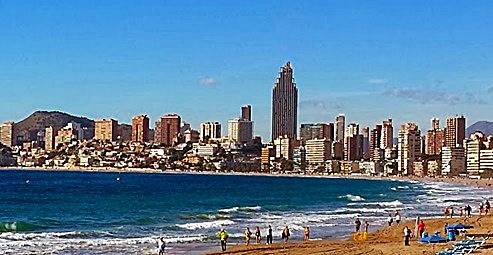 Away from the main tourist areas, especially inland most people will not speak much English, so if you don't speak Spanish consider taking a phrase book.

Every town and many smaller villages in Spain have a fiesta sometime in the year (fiestas often occur early in the year, especially in the south). Check the Spanish festival calendar before you book your trip if you want to catch some traditional Spanish celebrations.

If you are looking for guaranteed sun with warm weather, travel from May to September (or late April to late October further south). There are plenty of budget airline flights to Spain, with the best value deals available in the quieter autumn and winter months.

Below is a guide to some of the major holiday locations with ideas of "where to go" and "what to do".

Forming the coastal region of north-eastern Catalonia, Costa Brava extends from the French border in the North, to Blanes 60 km northeast of Barcelona. Costa Brava is a coastline of traditional Spanish seaside towns such as Cadaques (which inspired many of the paintings of Salvador Dali), Lloret De Mar and Palamos. Dali was fascinated by the light of the region and this is reflected in many of his works.

The Costa Brava towns are quiet in the winter months, but come alive during the long, warm summers as visitors from Spain, Germany, Russia and the UK flock to the region.

The picturesque city of Girona offers an escape from busy tourist resorts in the summer months. 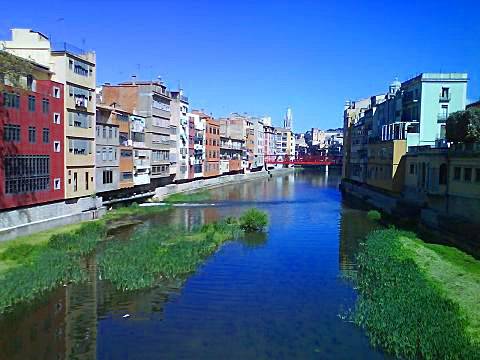 Salvador Dali's eccentric home in Cadaques - formerly several fishermen's homes, Dali merged them into a single surreal home where he lived for much of his later life and produced many of his paintings.

Barcelona El Prat Airport and Girona Airport are the main entry points into the Costa Brava. Barcelona airport is the second largest airport in Spain and it gets over 30 million passengers every year. There is a high-speed train connection from here to Madrid. Many people prefer to use the alternate airport of Girona, which is generally a little cheaper and has better access to the Costa Brava beaches.

One of Spain's most popular tourist regions, Costa Blanca or the White Coast extends from the mountainous coastline of Denia and Javea in the north to the flatter, salt marshes of Torrevieja in the south. Costa Blanca is among the most developed coastal regions of Spain, so if you are looking for peace and quiet and secluded beaches, this is probably not the place for you. However, if you are looking for a quintessentially Spanish beach holiday, you won't be disappointed by this region. 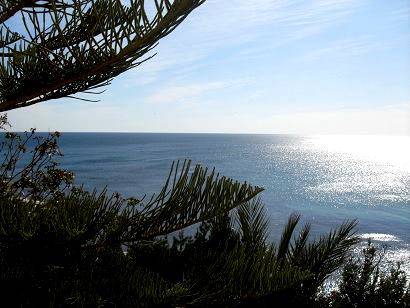 Spend a day with the kids at Terra Mitica, Benidorm's massive entertainment complex. There are rides, shows, pools (so take your swimming gear) and restaurants.

Costa Blanca is renowned for fantastic tapas bars and restaurants. Traditionally tapas was served free in Spanish bars, but nowadays many bars and restaurants specialise in tapas menus. Although tapas is mainly meat and fish, there are plenty of vegetarian options available such as patatas bravas, olives and manchego cheese.

Costa Blanca has perfect Mediterranean weather - warm winters, balmy summers and sunshine through most of the year. Summer temperatures can rise to the low 40s in July/August, but the temperature on the coast in summer is often moderated by a cooling offshore breeze. The World Health Organisation has nominated Costa Blanca as one of the healthiest places to live in the world. The peak season is in the Costa Blanca is summer, but if you are looking for lower rates, and lesser crowds, then go there during the winter months. 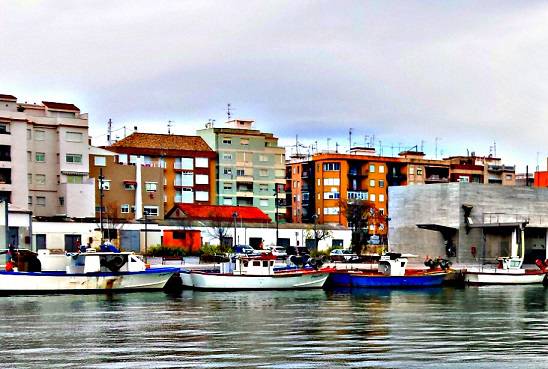 How go get there

The main airport of the Costa Blanca is Alicante Airport located just to the south of Alicante and around 40 minutes' south of Benidorm. Murcia Corver Airport is an option if you sre travelling to the southern Costa Blanca resorts including Torrevieja and Villamartin.

A couple of hours drive to the north Alicante is Valencia Airport which is now on the flight schedule of some of the low-cost airlines including Easyjet.

The Costa Calida or the 'warm coast", is 250 km of south eastern Mediterranean coastline, and is home to the warmest sea in Spain the enclosed Mar Menor.

The La Manga peninsula which encloses the Mar Menor is one of Spain's more up-market tourist areas, and his home to the exclusive La Manga Club which is frequented by many of the UKs football teams during winter breaks. 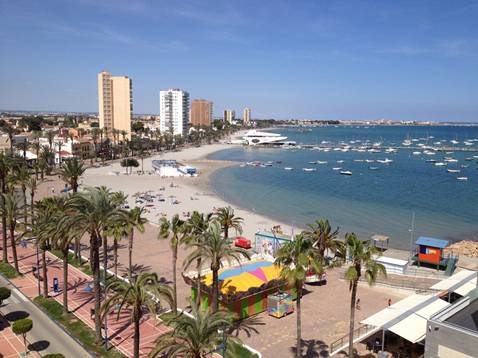 Cartagena is a major naval port and is home to the National Museum of Underwater Archaeology which offers a fascinating insight into Spain's naval past.

Attend Lorca's Semanta Santa, the Easter procession - one of the most popular fiestas in Spain.

Watersports at La Manga - the salinity of the water makes floating easier, and this makes it a very popular sporting centre.

Winters can have cold and wet days, (winter temperatures are typically 14-18 degrees maximum on the coast), but it is usually sunny, so winter is great for walking and sight-seeing. One of the best times to visit for swimming is autumn when the beaches are mostly empty, and the weather and sea are warm.

Murcia (Corvera) airport is located 30 minutes’ drive from the city of Murcia. Many of the low-cost airlines fly here, especially in summer.

Costa de la Luz or "Costa Luz" (Coast of Light) is the coastal Andalucian region to the east of Costa del Sol. It has plenty of sandy beaches, castles and fortresses and borders the impressive Sierra Nevada mountain range. The coastline is far less developed on the Costa Luz than on the Costa del Sol (particularly towards the border with Portugal). The Costa de la Luz is a great place for nature lovers, walkers, windsurfers and cyclists.

Facing the Atlantic Sea, this area extends from Tarifa in the south to the Guadiana River in the north. It encloses within it the provinces of Cadiz and Huelva. Tarifa is renowned for its windsurfing and water sports as well as for the fact that it has some of the best natural trails in Spain.

Those interested in history should pay a visit to the city of Cadiz, the naval port city which was the scene of a blockade from the British Navy over 200 years ago.

The Donana National Park is located close to the Spain-Portugal border where the River Guadiana meets the Atlantic Ocean. The area is a unique wetlands environment and is home to several rare native species such as the Spanish Imperial Eagle and the endangered Iberian Lynx as well as thousands of migratory birds.

The area was threatened by an ecological disaster in 1998 when a local mine poured dangerous metals into a tributary of the River Guadiamar. A massive clean-up operation has eventually restored the ecosystem of the park.

Cadiz and Jerez are renowned for the locally produced sherry, so a visit to one of the local sherry bars is a must.

Summertime in Cadiz is very hot - so autumn and spring are the best seasons for sight-seeing. Like much of coastal Spain, the winters can have wet periods, although in Cadiz it is unlikely to be cold. In winter rates are lower, but the water is much colder.

Jerez airport is the largest airport in the Costa De La Luz area. There are many flights from Madrid, Barcelona, Frankfurt, and London.

Since the mid-fifties, the Costa del Sol has been transformed from the coastline of small olive groves and quiet fishing villages described in Laurie Lee's "As I Walked Out One Midsummer Morning" into one of the most developed tourist areas in the world.

Nowadays the resorts of Torremolinos and Fuengirola which were small villages in Lee's day, have now become tourist hotspots to rival resorts such as Benidorm on the Costa Blanca.

However, drive a few kilometres inland and the footprint of tourism is far less noticeable. Here you can still find the small towns and villages which were described so vividly in the writings of Laurie Lee. Inland the Andalucian scenery is very beautiful, and hillside towns such as Mijas and Competa attract plenty of tourists.

The historic city of Malaga.

If you are in Malaga, the bars and restaurants of the old town serve some of the best Tapas in Spain.

With over 300 days of sunshine in the year, the weather in the Costa del Sol is good all the year round. Summer lasts for over eight months.

In winter it can be cold inland in the hills - temperatures on the coast are typically a few degrees warmer than inland, and this can be a factor in winter.

Malaga Airport has recently been renovated, and is the main airport for the Costa del Sol. 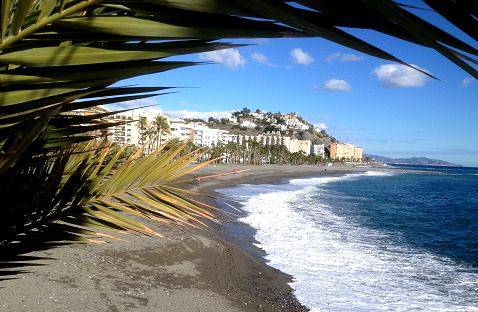 To the east of the Costa del Sol is the less-developed coastline known as Costa Tropical which forms the coastline of the province of Granada. There are a few larger resorts nestled along the coastline such as Almunecar and Motril, but much of the coastal strip is used for growing fruit and vegetables under large greenhouses.

In land, the Costa Tropical scenery is mountainous and rugged, and in winter the temperatures can drop significantly as you move away from the coast.

The picturesque seaside towns of Calahonda and La Herradura are quiet and have fantastic beaches. If you want somewhere to take the children, the resort of Almunecar has a water park (Aquatropic) located on the beach front a short walk from the town centre.

The Alhambra Palace in Granada is one of the most spectacular historical locations in all of Spain and is only a 1 hour drive from the Costa Tropical coastline.

Costa Tropical is hot in summer, warm in autumn and spring and mild in winter.

Malaga Airport is located to the west of the region, and Almeria Airport to the east. Both are around 1 hour drive depending on which side of Costa Tropical you are planning to visit. Granada Airport located just outside the city is around an hour drive to the Costa Tropical coastline through some stunning scenery. 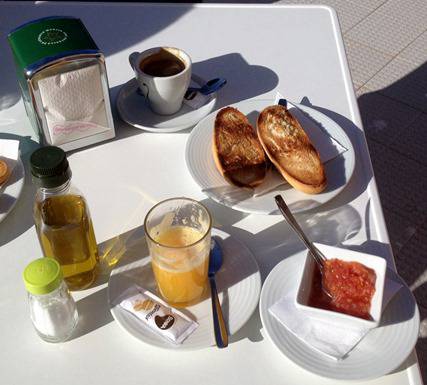 Wherever you are in southern Spain, a traditional Spanish breakfast served "al fresco" with coffee, toast spread with tomato paste or olive oil, and orange juice always gets the day off to a good start.

Spain produces some of the best wines in the world, and the red wines (vino tinto) are especially good quality at less than half the price they sell for in northern Europe.

Be prepared to pay around 2 Euros and you should get a good red wine. Spanish Rioja's provide excellent value for money and many of the local varieties are only available in Spain.

Paella is the archetypal Spanish dish consisting of rice fried with meat or freshly caught fish and shellfish, although for vegetarians many places will cook vegetable paella if you ask. Non-meat eaters may be interested in our Spain vegetarian guide.

Tapas was originally served as a free (gratis) appetizer in many Spanish bars and restaurants. Today tourism has helped to create a thriving tapas industry in Spain.

If you are renting a car in Spain for the first time, read information about driving in Spain.