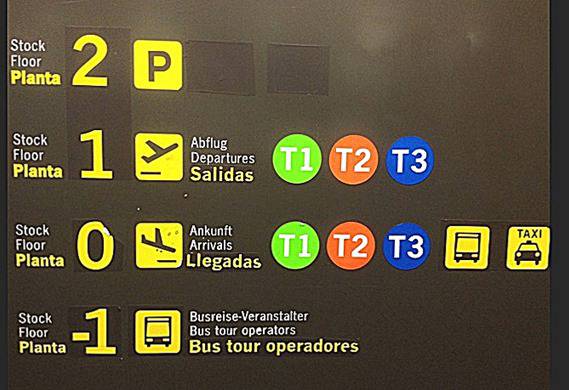 Malaga Airport is located approximately 8km to the south west of Malaga and offers excellent access to the Costa del Sol resorts.

At the terminal building, the Arrivals (Llegadas) building is located on Level 0, and Departures (Salidas) is above on Level 1. Most departures are now from the new Terminal T3, but some flights are from the old T2 building which is to the left as you view the terminal from the front. Also on Level 0 is the car rental car park, train station and a large taxi pick up area. There is short-term parking for visitors on the arrivals and departures levels.

At Malaga Airport most of the international rental companies have desks in the Arrivals area and provide vehicle collection in the purpose built rental car park located on Level 0 around 5 minutes walk from the arrivals hall.

If you rent a car with one of these companies you can either proceed to the car hire desks inside the Arrivals Hall or head to the car rental park on Level 0 (Floor 0) to sign the contract and collect the vehicle.

When there are long queues at the rental desks inside the building which is more likely to be the case in summer, it is often quicker to sign the contract in the rental car park.

For those renting a car with one of the onsite companies, the vehicle should be returned to the purpose built car park on Level 0 where you collected it. As you drive in to Malaga airport follow the sign s for "Rental Cars" as you approach the terminal building.

It takes around 15-20 minutes by car to get from Malaga Airport to Malaga city centre to the East, and Torremolinos to the West.

Almeria is just over 2 and a half hours to the east, and Gibraltar just over an hour to the West.

Road distances to some of the major resorts and cities are given below.

Malaga Airport is located next to the coastal A7/E15 Costa del Sol motorway making it very easy to drive to the nearby resorts of Torremolinos , Fuengirola, Puerto Banus and Marbella.

Malaga Airport has two new access routes that are exclusive to the airport providing easy access to the motorway. From the south the A7 will lead you directly into the airport, or from the north you can get to Malaga Airport by following West ring road. 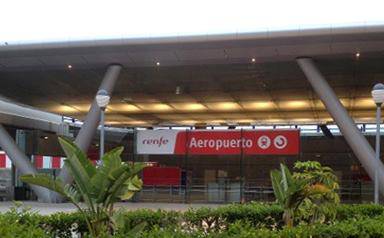 There are train and bus services directly from Malaga Airport to Malaga centre and major Costa del Sol resorts.

There is an underground train station at Malaga Airport just across from arrivals at Terminal 3 which offers a regular service to Malaga city centre, but also connects directly to a number of the Costa del Sol resorts to the west including Torremolinos and Fuengirola.

Taxi ranks are located directly outside Terminal 1 and Terminal 3, however, taxis in Malaga are not metered so it important to ask for a quote to your destination before leaving. Most taxis will automatically use the coast road due to the fact that it is faster but the Toll Road is safer and most taxi drivers will reluctantly use it instead if you ask for it in advance and are willing to pay the toll which is around 5 Euros.

There are two major bus services operated by the Malaga Airport Bus transit that run from the airport to the Marbella Bus Station which is about a 45 minute trip and to the Malaga City Centre which runs on a variable schedule so check the summer and winter schedules before embarking on your holiday.

Prices at the bars and restaurants at Malaga Airport are around double those you would find elsewhere on the Costa del Sol, so unless you want to use up your holiday Euros try to eat before you arrive at the airport (or bring your own food). A small bottle of coke or a small beer costs over 3 Euros at the large Cerveza bar located outside the Arrivals building.

Malaga Airport has a large selection of shops selling gifts, souvenirs, designer clothing and other designer goods. The most popular items to bring back from Spain to the UK include cigarettes and alcohol.

Although Spanish cigarettes cost around half the price of those sold in the UK, airport cigarettes prices are higher than those sold in the local tobacco shops (called Tabaquerias - look for the yellow "Tabacos" signs). Spanish wine and spirits can be purchased at the airport, but in Spain airport alcohol prices are a lot higher than in the local supermarkets, so it makes sense to buy alcohol before you get to the airport.

Perfumes, clothes and Spanish foods such as olives sold at the airport are generally not especially good value unless you find promotional offers.

The Holiday Inn Express is the closest hotel to Malaga Airport and offers easy access (less than 5 minutes drive to the airport terminals) and is very reasonably priced. There is no shuttle hotel bus service from this hotel to Malaga airport, so if you don't have a rental car you will probably need to get a taxi (or walk if you don't have much luggage). The hotel is rather difficult to find from the road and it is easy to miss the exit.

There are a number of other budget hotels including Hotel Campanile, Hotel Ibis and a Novatel located along the main MA-20 route into Malaga city centre. These hotels can be rather easy to miss (especially at night time), so it is recommended that you know which exit you need to take if you are driving. The majority of the hotels are located in the centre of Malaga, where parking can be a problem so check the parking facilities before booking a central Malaga hotel if you have a rental car.

TIP: Local Malagan produce such as wine, olives and tobacco and souvenirs are generally more expensive at outlets inside the airport than in the local shops and supermarkets.

Malaga is one of the most popular Spanish holiday airports, so there are plenty of airlines to choose from, with airlines such as Ryanair having a base at Malaga.

Some airlines may offer a reduced service, or possibly no service in the Winter months. In the winter the flight prices will tend to be a lot cheaper.

Airlines that fly to Malaga from the UK include the following:

The approximate flight time from most UK airports to Malaga varies from about 2½ hours from the south of England to 3 hours from Scotland.