Despite 50 years of tourist development in Andalucia, Malaga remains a quintessentially Spanish city, largely unspoilt by the wave of tourism which has swept across the Costa del Sol. Malaga has the attraction of being a city location with excellent beaches within walking distance from the city centre.

Malaga is often overlooked by Costa del Sol visitors, but the city is an inspiring destination for a weekend break or a holiday day-trip. The city has developed around the large port which is often lined with cruise ships bringing in visitors for a day trip. 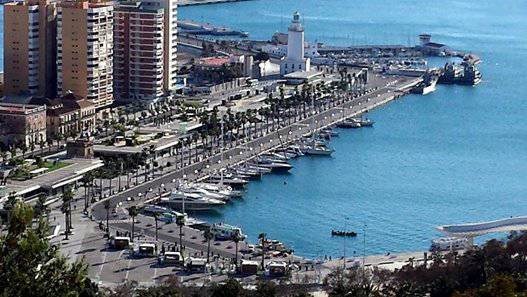 In Malaga you can shop in the morning, go to the beach in the afternoon (Malaga city centre is only a 10-15 minute walk from the Playa de la Malagueta (Blue Flag beach) and enjoy the vibrant nightlife of the old town in the evening. Malaga has a wonderfully preserved old town (Centro Historico), museums, tapas bars, fresh fish restaurants, a daily market (except Sundays), botanical gardens, a castle and a large pedestrian shopping area.

The annual street carnival is held in February when spring is in the air, and the locals celebrate in style with parades and pageants in the streets of the commercial district.

Malaga centre is essentially divided into 2 main areas - the old town with its narrow streets and exquisite architecture, and the adjoining commercial centre.

The city of Malaga was built by the Romans, but much of the architecture is heavily influenced by the Moors. The old town is the tourist hub of Malaga, with its narrow streets lined with tapas bars, sherry bars, flamenco clubs, tourist shops and all manner of cafes and restaurants. At the heart of the old town is the eye-catching Renaissance and baroque influenced cathedral. The cathedral is known as "La Manquita" to locals as one of the two towers remains unfinished. 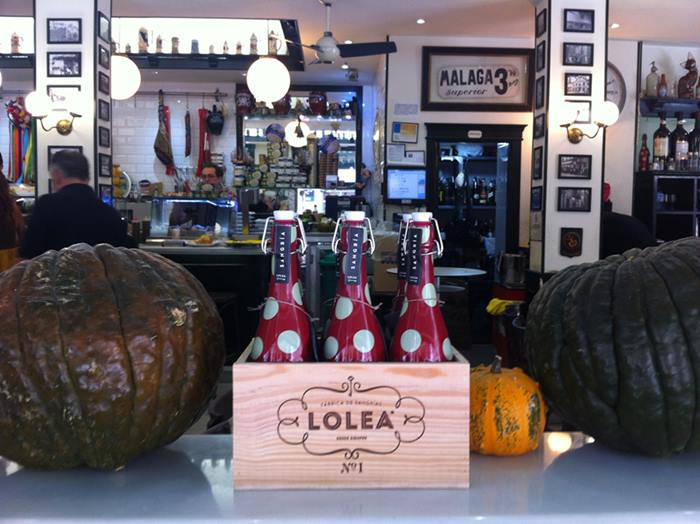 The restaurants of Malaga are renowned throughout Spain, and the old town has some of the best tapas bars in Spain. Traditionally in Spain tapas was given away free to Spaniards before they ate, but nowadays tapas generates a lot of additional revenue. Tapas dishes typically have a price range between € 3 and 5, so it is easy to run up a bill quickly if you try a little of everything.

Recommended restaurants in Malaga old town include Cerveceria Los Gatos next to Plaza Uncibay, El Refectorium Catedral (opposite the Cathedral on Postigo De Los Abades), Patio de Beatas on Calle Beatas (close to Plaza Uncibay) and Toro at Muelle Uno (you will need to book a table in summertime).

Bodega Bar El Pimpi is a wonderfully authentic Spanish Bodega bar located in the Old Town on the street directly below the Alcazaba.

For shopping in Malaga city centre walk along the beautiful Calle Larios to Plaza Constitucion, the main commercial area. El Corte Ingles is located off the Alameda. This large department store has many floors and lots of international and high street brands.

Plaza Mayor (close to the airport) is a large shopping precinct with high street brands. Plaza Mayor is accessible via the Cercanias train service from Malaga (Plaza Mayor is the stop before the airport). At Plaza Mayor there are also plenty of restaurants, children's play areas and a cinema.

La Canada, along the coast in Marbella is a 45-minute drive from the city of Malaga. This centre has hundreds of stores. It is one of the best shopping centres outside of Barcelona or Madrid. Open Mon-Sat 10am-10pm 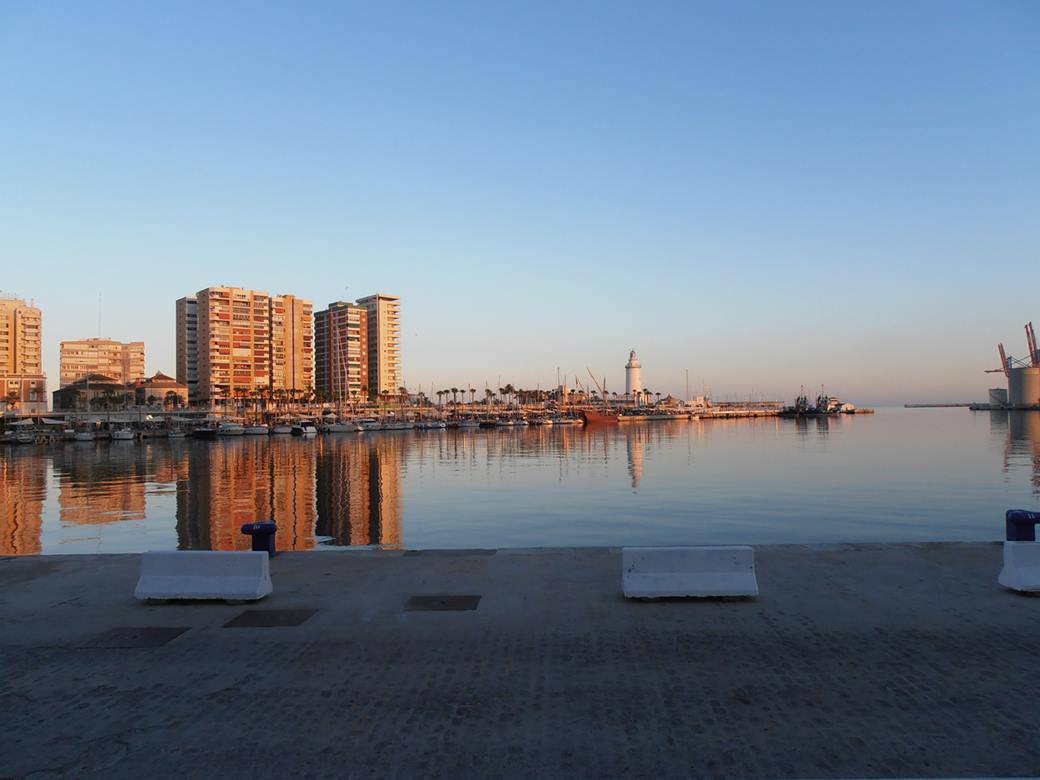 Gibralfaro Castle and the Alcazaba 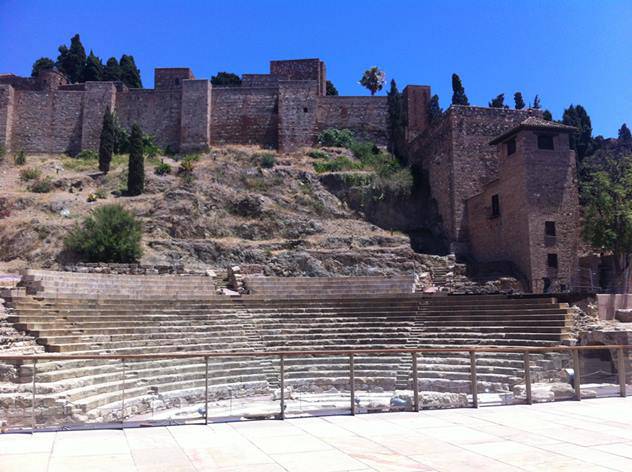 It is possible to walk up to Gibralfaro Castle and the Alcazaba, but it is a steep climb at times (the castle is around 130m above sea level). Alternatively, there is a regular bus service from Malaga (Bus Route 35). If you prefer to drive, the easiest route is via the Limonar exit of the E15/A7 (Exit 244). You can also take a taxi up the hill (costing around € 5-6) and walk down.

Admission is excellent value at just over € 2 (less for pensioners), and there is a small museum and a cafe within the castle grounds where you can enjoy the stunning views of Malaga town including the harbour, coastline and Malaga bull ring.

Set in the grounds below the castle is the Alcazaba - an ancient Muslim fortress which was built in the 11th century by the Moors (built before Gibralfaro which overlooks it). It is possible to wander around the Alcazaba for free on your way up to Gibralfaro Castle.

The recently renovated Malaga Airport is the only public airport in the Costa del Sol and is served by most of the low-cost airlines including Ryanair and EasyJet. It is located less than 10km from the centre of Malaga. There are trains and buses from the airport to the city centre. Malaga Airport

There is a regular train and bus service from the airport to Malaga city centre and to some of the main coastal resorts including Torremolinos and Fuengirola.

In the quieter months (October to March) it is often possible to pick up a bargain return flight for a weekend break.

Getting Around in Malaga

Although you could hire a car, parking in the centre of Malaga is difficult, so if you have a city centre hotel and plan to rent a car, check if there is a car park close by or whether the hotel has underground parking.

Malaga centre is not spread over a wide geographical area, so walking, the Metro (underground) or buses are good options.

If you have a car, the Ibis Budget (which is great if you have a pet travelling with you) or the Hilton Garden Inn are good options. Both are located a couple of minutes from the MA-20 motorway and are close to the Puerta Blanca Underground station.

Closer to the centre there are a cluster of "hostals" and hotels such as the Don Curro on Calle Martinez. This street is the ideal place to stay if you are planning to have a night out in the old town and walk back to your accommodation. 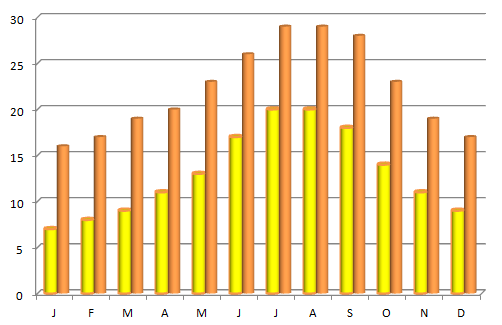 Malaga enjoys an almost sub-tropical climate, with temperatures moderated by the Mediterranean, and being protected by the Sierra Nevada mountain range to the north. The climate along the coast is 2 or 3 degrees warmer in winter than inland, whereas in summer it is a little cooler.

The climate around Malaga is one of the warmest in Europe in winter which makes the Costa del Sol coastline a popular destination all year round. In the winter the daytime maximum temperature typically ranges from 14-20 degrees Celsius, with many clear sunny days.