Guide to the Costa Almeria

The Costa de Almeria in South Eastern Spain is less developed than neighbouring Costa del Sol. The region has more annual sunshine hours than anywhere else in Europe as well as some of the highest annual average temperatures. This stretch of Andalusian coastline has a variety of beaches and some of the most stunning sea views in Spain. Almeria boasts around 25 blue flag beaches.

The Almeria coastline stretches from the east of Granada, beginning at Adra and ends just above the resort of Vera where it meets with Murcia. The region is more popular with Spanish tourists than visitors from abroad, but this makes it the perfect setting for a family holiday as prices tend to be a little cheaper in Almeria than the Costa del Sol.

A large proportion of the land in Almeria is used for growing produce in huge polytunnels and greenhouses due to the favourable climate. El Ejido and Nijar are the main greenhouse areas. The western side of the Costa de Almeria is less developed than the east. Choose between family friendly coastal towns or rustic beaches at Cabo de Gata. In resort towns such as Roquetas de Mar and Aguadulce with such long, sandy beaches you won't have to fight for space, even during the busy summer months. 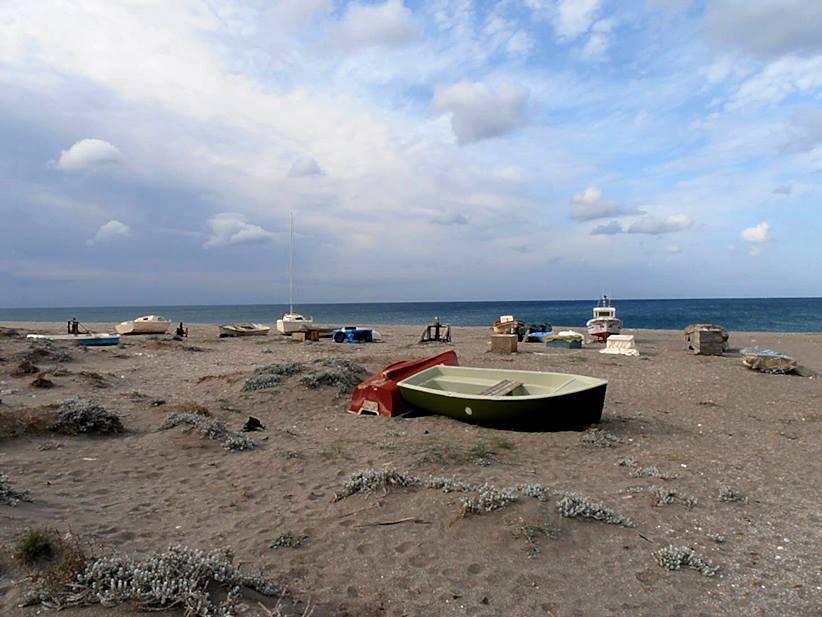 Below is a quick guide to help you choose the most suitable resort on the Almeria Coastline:

Below is a guide to some of the main resorts of the Costa de Almeria. 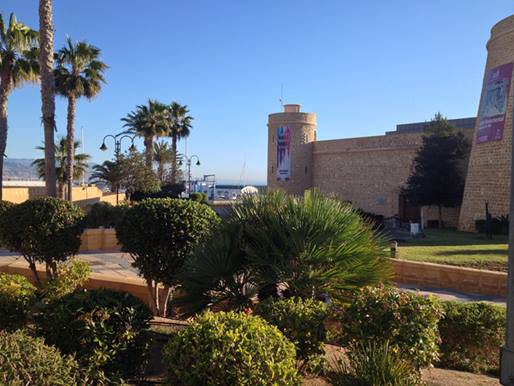 Roquetas de Mar is a good choice as a base for a family holiday. There is no shortage of Blue Flag beach space and the seafront has plenty of shops, bars and restaurants. The Port and lighthouse in Roquetas is the old part of town. Castle Santa Ana which overlooks the port is the major tourist attraction in the town, but it is also a centre of interpretation and often has activities outdoors in the summer months.

There is a very attractive promenade from Roquetas which stretches all the way to Aguadulce. The promenade has a wide walkway and some parts have a bicycle lane too.

If you have children, Aquarium Roquetas at Roquetas de Mar has sharks, piranas and all manner of tropical fish. The aquarium is closed Monday and Tuesday. There is also a waterpark (Mario Park) close to the Aquarium on Caminos de las Salinas (opens June to September).

San Jose is the main town in Cabo de Gata. The town has a few larger hotels and plenty of shops and restaurants. This resort is very busy in August, with Spanish tourists flocking to the town.

For the active visitor, from San Jose it is possible to hike to some of the smaller beaches of Cabo de Gata along coastal paths. There are also some water sports companies located in San Jose. The beach in San Jose is a horseshoe shape but has plenty of space and local amenities.

If you prefer smaller village-type locations as a holiday-base, you can find accommodation in Carboneras, Las Negras or Nijar

Costa Almeria’s largest resort is the hilliside village of Mojacar which is extremely popular with British buyers, many who have holiday homes or live here year-round. Mojacar is divided into 2 main areas – the whitewashed village of Mojacar Pueblo set on the hill, and the coastal resort Mojacar Playa which is a modern resort overlooking the beach. The beach (Mojacar Playa) extends for several kilometres with plenty of Blue Flag beaches. Mojacar Playa has plenty of shops and restaurants and has a plethora of picturesque Andalusian plazas. The resort is ideal for families and older visitors.

Mojacar Pueblo is around 2km in land from the beach resort, but it worth a visit if you are staying at the beach resort. The castle overlooking the old town was originally a vantage point to detect raiding parties from Africa, and today offers fantastic views over the coast.

Insider tip: Remember to stop off at Tito's beach bar, the oldest chiringuito in Mojacar. 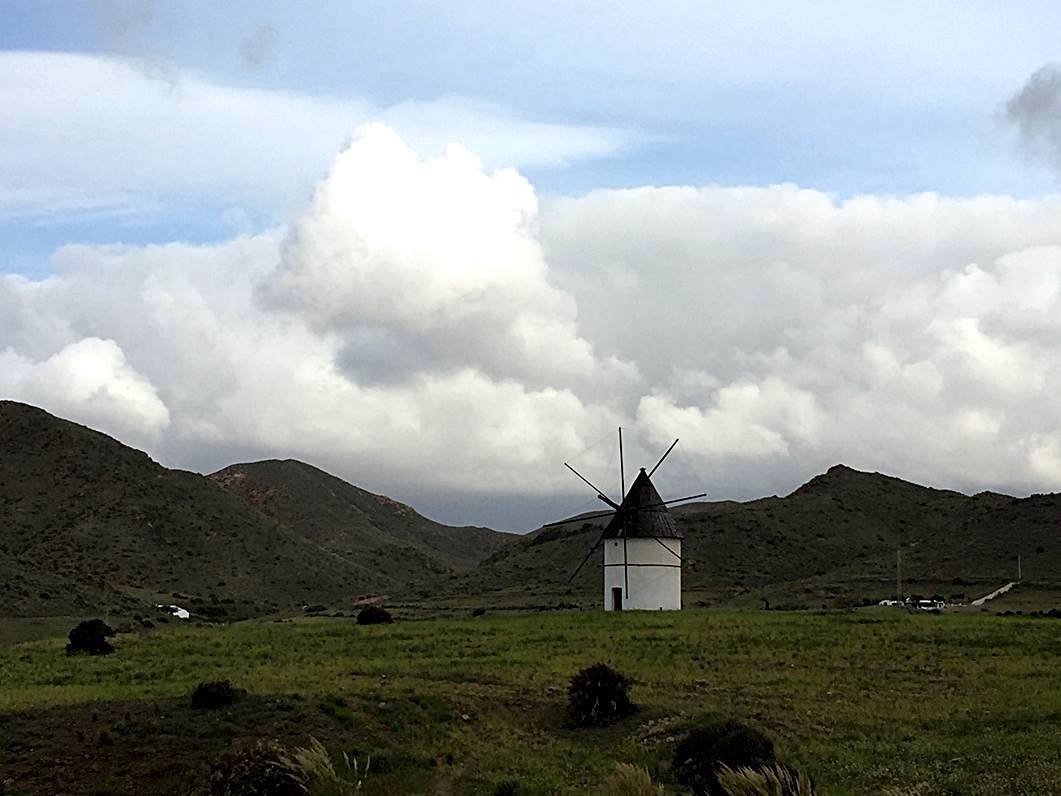 The calm, blue waters of the Costa Tropical are very popular with scuba divers, with a number of diving centres located across the region in towns such as Aguadulce and San Jose.

For golfers there are several courses in Almeria province. Envia Golf, Almerimar and Playa Serena some of the most established.

Walkers should base themselves in the Cabo de Gata region where there are a number of excellent coastline walks.

For a Few Dollars More

The desert of Tabernas has an American theme park Oasys Theme Park (also known as Mini Hollywood), which was originally purpose-built by Sergio Leone for the Spaghetti Western "For a Few Dollars More" which was filmed in Almeria in the 1960's and starred Clint Eastwood.

Oasys also has a zoo with around 175 species of animals, and in summer there is a recreational zone with a large pool for the kids to cool down.

If you are interested in seeing more of Sergio Leone's film shooting locations, head inland to Rodalquilar and Los Albaricoques. The Hostal Alba in Los Albaricoques is full of memorabilia and photos of the films produced locally. The lunchtime menu is good value for money too.

The dry and rugged interior scenery of the Costa de Almeria has formed the backdrop for many other films and TV productions including Lawrence of Arabia, Indiana Jones, How I Won The War (starring John Lennon) and Game Of Thrones.

Getting around the Costa de Almeria

The E15/AP-7 is a non-toll motorway from Granada eastbound to Almeria. The A92 motorway is non-toll road linking Granada to Almeria too. From Murcia the Ap-7 Southbound heads to Almeria.

The Cabo de Gata Natural Park has several routes which are not surfaced, not all places of interest are accessible by car. It is highly recommended to get a map of Cabo de Gata before driving into the park area. The road up to Mirador de las Sirenas is narrow and at one point only allows for one vehicle, so it is important to extreme caution along this stretch of road. (ALP 822 From Las Salinas, San Miguel de Cabo de Gata up to the lighthouse)

Being the south-eastern outpost of Spain has resulted in Almeria not having a particularly comprehensive train infrastructure. There is a train station operated by RENFE is in Almeria which has a twice daily direct train to Madrid and also direct connections to Seville. You can get inter-connecting trains to Granada, Malaga, Cordoba and other Spanish cities.

Local buses are the best option to get around if you don't have a car. There are regular buses to and from Almeria to most of the main resorts run by Alsa. Alsa buses also run to Almeria Airport via Almeria.

Getting to Costa Almeria

Almeria Airport is situated in the area known as Retamar, this is to the East of Almeria. It is 40 kms from the city centre and takes just over 30 mins to arrive. Alternative airports are Murcia International (around 200km), Malaga (230km) and Granada. (165 km)