A Guide to Spain's Sherry Triangle

On the western side of Andalucia, just to the north of Cadiz, are Jerez de la Frontera, El Puerto de Santa Maria and Sanlucar de Barrameda, which together form the three corners of the region's so-called Sherry Triangle.

Virtually all of the world's sherry is produced here, and it is almost impossible to turn a corner without stumbling across the scent of fortified wine. 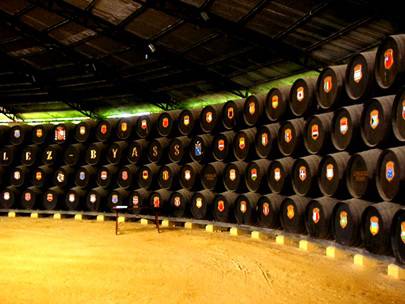 But even if this dry and fruity wine doesn't make your mouth water, there is a wealth of other allures; gastronomic, historic or otherwise that will.

Cadiz is reputedly the oldest city in Western Europe with Phoenician origins and was the main port for trading with America during the 18th and 19th centuries. The city is often overlooked by tourists but is a perfect location for anyone seeking an authentic Spanish experience. Both Jerez and El Puerto, though much smaller than neighbouring Seville and Cadiz, are technically cities, since they have their own cathedrals.

You could be forgiven for thinking that El Puerto's cathedral was since long forsaken, given the sorry, crumbling state of much of its exterior, yet it still opens for service almost every day. An abundance of storks have made the dilapidated section their home over the years, rendering it a bird watcher's nirvana. It is actually very rare to see so many together at onceat such close quarters.

El Puerto's Plaza de Toros is Spain's third largest bullring, with a 12,000 capacity. The structure, along with both bull statues either side of it, remains an iconic symbol of Castellano culture and tradition, despite the fierce and growing opposition to bullfighting in Spain.

In Jerez, Flamenco is probably the biggest draw, since it is here that the centuries-old music and dance genre was allegedly conceived. Bario de Santiago, opposite the cathedral, is packed with Flamenco bars, such as Arco de Santiago (C/ Barreras 3) or La Taberna Flamenca (Angostillo de Santiago 3), though the best time to go is during February/March, when the city explodes with music and dance for The Flamenco Festival of Jerez. 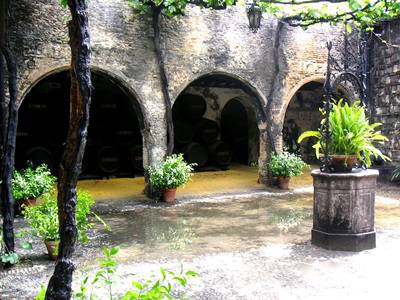 Naturally, all three corners of the triangle are inundated with authentic, sweet-smelling and often elaborate bodegas, many of which offer tours for anyone who is especially keen to learn more about sherry production.

Tio Pepe, produced in Jerez, is perhaps the best known of all the brands. It tends to make an appearance at Christmas time in the UK, but here in Spain, and particularly Jerez, any time is considered appropriate. The Tio Pepe Bodega offers afternoon tours of its vast and dusty wine cellars, lasting one and a half hours, for anywhere between €12.50 and €18.50 per adult ticket, depending on how much wine and tapas you wish to consume afterwards.

Bodegas Lustau in Jerez is popular with tourists offering sherry tasting tours for around €16-25. The basic tour includes tasting a variety of fortified wines including vermouth.

Similarly, Sanlucar boasts its own collection of tour-offering bodegas, including Barbadillo, La Gitana and Pedro Romero.

In El Puerto (Cadiz), Terry and Osborne are the best known, the latter having managed to craft a unique advertising campaign by erecting large, black bull-shaped billboards across the region.

There are plenty of options available when it comes to eating out but it's all about fried, fishy tapas in coastal El Puerto and Sanlucar de Barrameda. Chocos Fritos (fried octopus) and Boquerones Fritos (fried anchovies) are staple dishes in these parts and demand to be tried, washed down with a couple of canas - lager served in small, often frozen glasses to keep the fizz alive and temperature down, or a tinto de verano (refreshing red wine and lemonade cocktail).

To do as the locals do, head to El Puerto's Romerijo, a seafood restaurant in the centre of town specialising in fried fish and marisco (shellfish). This place buzzes with life and that sort of deafening, overly animated Spanish chatter that characterises Andaluzes. The crab and prawns (which you will need to peel yourself) are both big hits here.

Fino, best served chilled, is the local and most popular variation of sherry wine. Each member of the triangle makes theirs slightly differently. In El Puerto and Sanlucar (where it is known locally as Manzanilla), it is light in taste owing to the cooler coastal climate, which yields a thicker layer of 'flor' (a strain of yeast that develops on the surface) when the sherry is aging. The stuffier wine cellars of Jerez produce a thinner layer of 'flor', thus a stronger flavour due to higher oxygenisation.

Fino is available in all bars, bodegas and supermarkets.

The coastline around Cadiz which stretches towards the Portuguese border to the west, is known as the Costa Luz (Coast of Light). The beaches here are far less developed than the Costa del Sol to the east.

Sanlucar has its fair share of popular beaches too; Bajo de Guija fills up in the summer and visitors can even take the ferry across the river to Parque Nacional de Donana, an area of unique biodiversity and one of Europe's largest wetland reserves.

Jerez forming the top corner of the triangle is surrounded by countryside, a lot of it filled with mountains and trails for hikers and climbers to take advantage of. Nearby Arcos de La Frontera is especially popular for those wanting to see more of el campo.

May is the busiest time of year in the sherry triangle, since this is when each annual Feria takes place. This week-long celebration which is as authentically Spanish as it gets, involves lots of traditional Sevillanas dancing, elaborate Trajes de Gitana (gypsy style dresses) and a classic variation of sherry wine called el rebujito (fino sherry mixed with lemonade).

Traditionally, Jerez feria also known as Feria del Caballo (the Horse Fair) comes first at the beginning of May, with El Puerto's second and Sanlucar the week after that.

May is also an ideal time for weather; it tends not to be too hot nor too rainy, with a light spring breeze.