On the road to Benicassim Festival 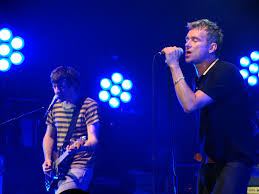 Benicassim Festival also known as FIB (Festival Internacional de Benicassim) is a rock music festival held on the outskirts (but within walking distance) of the small Spanish seaside town of Benicassim, just to the north of the city of Castellon de la Plana and around 70km north of Valencia. The first festival was held in Benicassim in 1995. The festival now attracts over 50,000 music fans, and top artists such as Bob Dylan, The Cure, Oasis and the Stone Roses have played there in recent years.

The dates and line ups for Benicassim can be found here.

Getting to Benicassim by Car

Driving from a Spanish airport to Benicassim

If you are planning to fly to Spain and hire a car to drive to Benicassim, the closest airport is Valencia Airport which is around 90km by road to the south. Other airports within driving distance are Reus airport near Tarragona (160km), Alicante (260km), Barcelona (270km) and Girona (around 300km).

The route to Benicassim from all of these airports is very straight-forward - just follow the AP-7 Mediterranean coast road. From Valencia Airport (or Alicante Airport) head north on the AP-7 motorway (toll road), or from Reus Airport, Barcelona or Girona, head south on the same motorway.

To avoid the AP-7 tolls, there is a smaller road the N340 which runs parallel to the AP-7. The N340 is slower (it may take up to twice as long depending on traffic), but you do get to see many of the small Spanish coastal towns during your drive.

An alternative to the Mediterranean coastal route is to fly to Madrid and pick up a rental car. The drive from Madrid is just over 400km, and should take 4 to 5 hours. 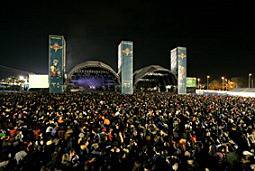 If you are having difficulties finding cheap flights to mainland Spain, it is possible to fly to Palma Airport in Majorca and get a ferry to Valencia.

Driving from the UK to Benicassim

If you are considering driving from the UK to Spain for Benicassim, the trip should take around 2 days from Calais (the trip distance is around 800 miles or 1200km).

From personal experience you should allow 2 nights stopover, and make sure that you avoid Paris as the roads here are very poorly signed and it is very easy to get lost. An alternative route to Spain avoiding Paris is via Rouen to the west.

We have more information about driving in Spain here.

Getting to Benicassim by Public Transport

Benicassim has a train station and a coach station (coaches are usually the cheaper option). There are additional coaches from Barcelona (4 hour journey) and Valencia airport (1 hour) during the festival.

If you decide to take the train to Benicassim, it is likely that the direct services from Barcelona, Tarragona and Valencia will be very busy during the festival. As an alternative you can go to Castellon de la Plana which is around 14km from the festival site, and has more trains than Benicassim.

To save money, avoid the high speed (AVE) trains if you are travelling from Madrid (to Valencia). 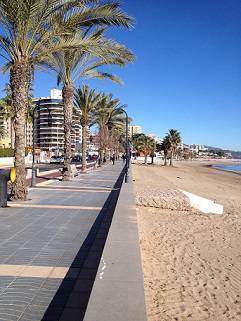 For most of the year Benicassim is a quiet Spanish resort town with a slightly "up-market" feel to it. There are cafes, bars and restaurants lining the 6km palm-lined promenade, and the resort is ideal for families.

Most festival goers will be camping on the festival site. There are a couple of points worth mentioning if you are planning on camping in Spain in the middle of summer - it can be incredibly hot in a tent once the sun comes up, and normal UK tent pegs won't penetrate the Mediterranean soil (6 inch nails are ideal if you can get hold of some in the UK before you travel).

If you want to avoid the Mediterranean camping experience, prices of local hotels will be at a premium during the festival, so it may be worth staying in a nearby town such as Castellon de la Plana.