There are so many reasons to visit Barcelona - from the historic streets of the Gothic Quarter to the chaotic streets of Las Ramblas, the breath-taking architecture of Gaudi and the beautiful sandy beaches of Barceloneta, the wonderful Catalonian food and drink, and of course there is football and the living legend that is Lionel Messi. Whatever attracts you to Barcelona you are unlikely to leave the city disappointed. 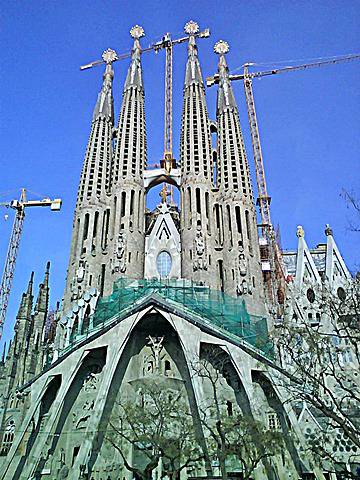 If you only have time to visit one attraction in Barcelona, it would probably have to be the breath-taking Sagrada Familia. This temple which was the vision of Antoni Gaudi - construction work started in the early 1880's and is still in ongoing today. The elaborate and intricate design is due for completion in 2026.

You can view the impressive building from the outside for free, or if you want to go inside and see the spectacular views from the towers, fees vary from around €15-30 depending on the package, with some of the fee going towards the continuous restoration project. Book tickets in advance from the Sagrada Familia website to avoid the long queues that snake around the entrance gate.

La Rambla or Las Ramblas is the main artery of the city, a flow of human energy and activity which leads from the Plaza de Catalunya down to the sea. To either side of Las Ramblas smaller streets spread like veins into the Gothic Quarter and the slightly seedier El Raval district.

If Las Ramblas is Barcelona's main artery, the Old Town Gothic Quarter is the cities beating heart. This part of Barcelona is a maze of narrow streets leading the throngs from Las Ramblas into a world of narrow streets lined with bars, restaurants, cafes and clubs of every description. Don't miss the Plaza del Pi or the Plaza de Sant Felip Neri, 2 of the most attractive squares in this historic district. 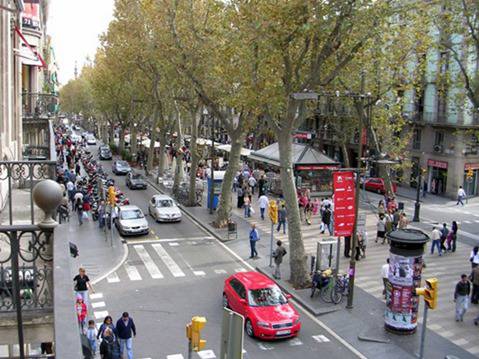 The Musical fountain at Placa d'Espanya is a spectacular combination of music, lasers, light and water. Sessions last for 30 minutes, but check timings as it is easy to miss the show. It is advisable to visit after dark. The closest metro is Plaza Espana.

Take the cable car from the beach at Barceloneta to Montjuic and get a birds-eye view of the port area. There is a cafe at Montjuic where you can have a refreshing bottle of San Miguel or enjoy a Spanish coffee.

Parc Guell is a short bus ride from the city centre, and offers some of the best views of Barcelona. Designed by Gaudi, Parc Guell is the home to a number of his renowned statues and buildings, but also offers a refreshing break from the bustling streets of the city centre.

The Park is built on a hill, so allow plenty of time to reach the summit where you can capture the best photo opportunities. 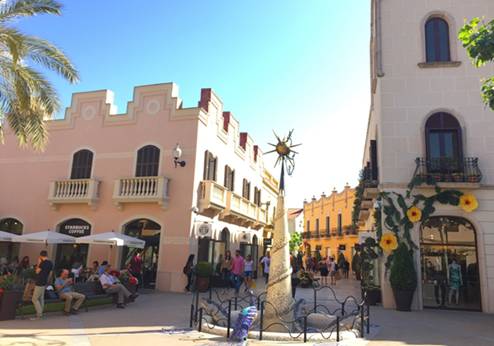 La Roca is a retail outlet shopping park located around 40kms outside of Barcelona towards Cardedeu. International and Spanish brands are all well represented at this high end shopping centre. Shop around Spanish stores like Bimba and Lola, Purificacion Garcia, Lupo and Camper. Other international labels like Versace, Gucci, Tommy Hilfiger, Calvin Klein and Armani. Mango and Nike also have huge stores on the edge of the retail park. La Roca tends to be busier on Saturdays, so visit mid-week if you can to avoid queues.

By car take exit 12A to La Roca Village (not the first exit 12B which leads to the village of La Roca. There is also a special "shopping bus service" from the city centre. More information about getting to La Roca.

The L'illa shopping centre is located towards the top of Diagonal. It has FNAC and some fashion stores such as Diesel, Mango and Bimba and Lola. The market area in the basement has places to eat. Along Diagonal there is a large Corte Ingles department store. Next to the Maria Cristina Metro stop, you will also come across the Centro Pedralbes. This small shopping centre has some nice boutiques and is pleasant for shopping being less hectic than Plaza Catalunya.

Get there by Tram, Bus 33 or 34 and Metro Maria Cristina on the Green line. 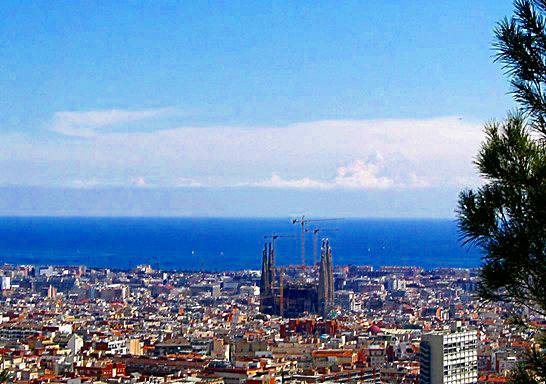 Barcelona is located on the Costa Brava, and has a warm Mediterranean climate. The best months to avoid are mid-June to August when the heat is intense.

During spring and autumn the rainfall can be quite high and there are occasional thunderstorms, but generally the days are sunny and warm. Winters are typically sunny with temperatures ranging from around 10-16 degree's maximum which is perfect for site-seeing.

If you are travelling on a budget, the best advice in Barcelona is to try to eat where the locals eat as the bars and restaurants on Las Ramblas are likely to charge premium tourist prices. Many of the best tapas is served just off Las Ramblas in the Gothic Quarter and El Raval. La Esquinica close to Poble Sec Metro has a great reputation for high-end tapas, but here as at many of the most popular restaurants you may have to book in advance.

La Vermuteria del Tano near Joanic Metro is an authentic and highly recommended Vermouth and Tapas bar, but it is so popular with the locals and visitors you may have to queue to get inside. Els Quatre Gats has a long cultural and literary history and once a meeting place for artists and writers. Pablo Picasso and Antoni Gaudi both reportedly visited the establishment. Opened in 1897 it is still going strong today serving Catalan and Mediterranean cuisine. Find it on Carrer de Montsio, 3 in the Gothic Quarter.

Vegetarians will love Maoz Falafel located at Carrer de Ferran, 13 near the Liceu metro. Here you can fill a falafel wrap for around €5 with your choice of fillings. If you include olives in your wrap watch out for the stones. Time Out has some excellent guides on places to eat in Barcelona. 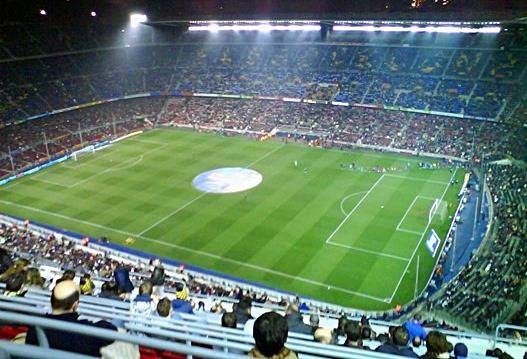 If you are considering trying to catch a Barcelona game at the Nou Camp, many games tend to sell-out so you may be better to book tickets in advance. There are often large queues on match-day.

You can buy tickets from a number of outlets around the city, so if the match isn't likely to sell-out this is usually a much cheaper option than booking via an online agency.

You can also book FC Barcelona tickets online direct from the club.

The hop-on, hop-off buses are a great way to see the best of Barcelona. You can choose a tour which focuses on the Gaudi buildings, or there more general tours visiting the main tourist landmarks. If you are planning on using public transport, the Barcelona travel cards offer excellent value.

If you are travelling on a budget, you can hire a bicycle at the water-end of Las Ramblas next to the port. Sunday is a great day to hire a bicycle as there isn't too much traffic on the roads.

TIP: Barcelona city centre covers a large geographic area, so check the name of the closest metro stop to your accommodation before travelling, and take a street map.

The Gothic Quarter has a huge number of "pensions" and is ideally placed for the city centre shops and nightlife. The 1 star Roma Reial is available for around 60 € per night. At the other end of the scale, the 5 star W Barcelona in La Barceloneta is priced at 300 € per night in peak season.

Barcelona El Prat airport is located a few kilometres to the south of the city centre. Ryanair and Easyjet offer plenty of low cost flight options to this airport. It takes around 25 minutes to reach the city centre by train (RENFE), and slightly longer by bus. Aerobus offer a shuttle service to the city

Girona Airport is located around 1 hour to the north of Barcelona, but often has cheaper flights than El Prat. Ryanair fly from Girona to many destinations in the UK, and there is an-interconnecting bus which shuttles visitors to Barcelona. The buses are co-ordinated to coincide with the Ryanair flights.

TIP: Barcelona has more than its fair share of pick-pockets. Be careful in popular tourist areas such as Las Ramblas, Parc Guelle, and on the Metro. Also be careful when withdrawing money from cashpoint machines, especially at night as these are also a target for theft.