Portuguese authorities have stumbled upon an unintentional method for easing congestion on the formerly busy A22 motorway which connects the Algarve to Spain. The solution is in many ways the cause of the problem - the A22 has now become a toll road. The toll was introduced as a way of increasing tourist revenue, but critics argue that the measure is having the reverse affect by driving tourists away. 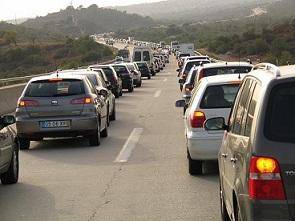 The controversial toll imposed by the Portuguese government on the main motorway of the Algarve is having a negative impact on visitor numbers claims Algarve Tourism Association spokesman Desiderio Silva.

The A22 officially became a toll road back in December 2011, and has been a constant "bone of contention" for visitors to Portugal's premier holiday region. The A22 is the arterial route of the Algarve, connecting the border with Spain to Faro, Albufeira and the western Algarve resorts.

Problems collecting the toll have exacerbated tourist concerns, and many visitors from Spain and other European countries say that they will holiday elsewhere in future. Blue Valley Car Hire spokesman Matt May confirms that the toll has not been well received with UK holidaymakers.

"We have had a few complaints from our car rental clients, mainly due to the method of toll collection which has been poorly administrated. The number one complaint is the failure to provide toll booths on the A22. People don't generally mind paying a toll, but they object to having to spend time going to local Algarve Post Offices to pay for it. We had a case last year where a tourist used the A22 to get to the airport for his return flight and couldn't pay as he had to leave the country which is plainly ridiculous".

A second negative impact of the toll is that many locals and visitors are now converging on the busy N122 coastal road which runs in parallel to the A22.

The Portuguese authorities would be well advised to take a look at the neighbouring Spanish model of toll collection used on the busy A7 Mediterranean coastal route, which has payment points installed at all of the exits.

Try out the new online A22 fee payment website which allows you to pay toll fees after you have used the motorway.